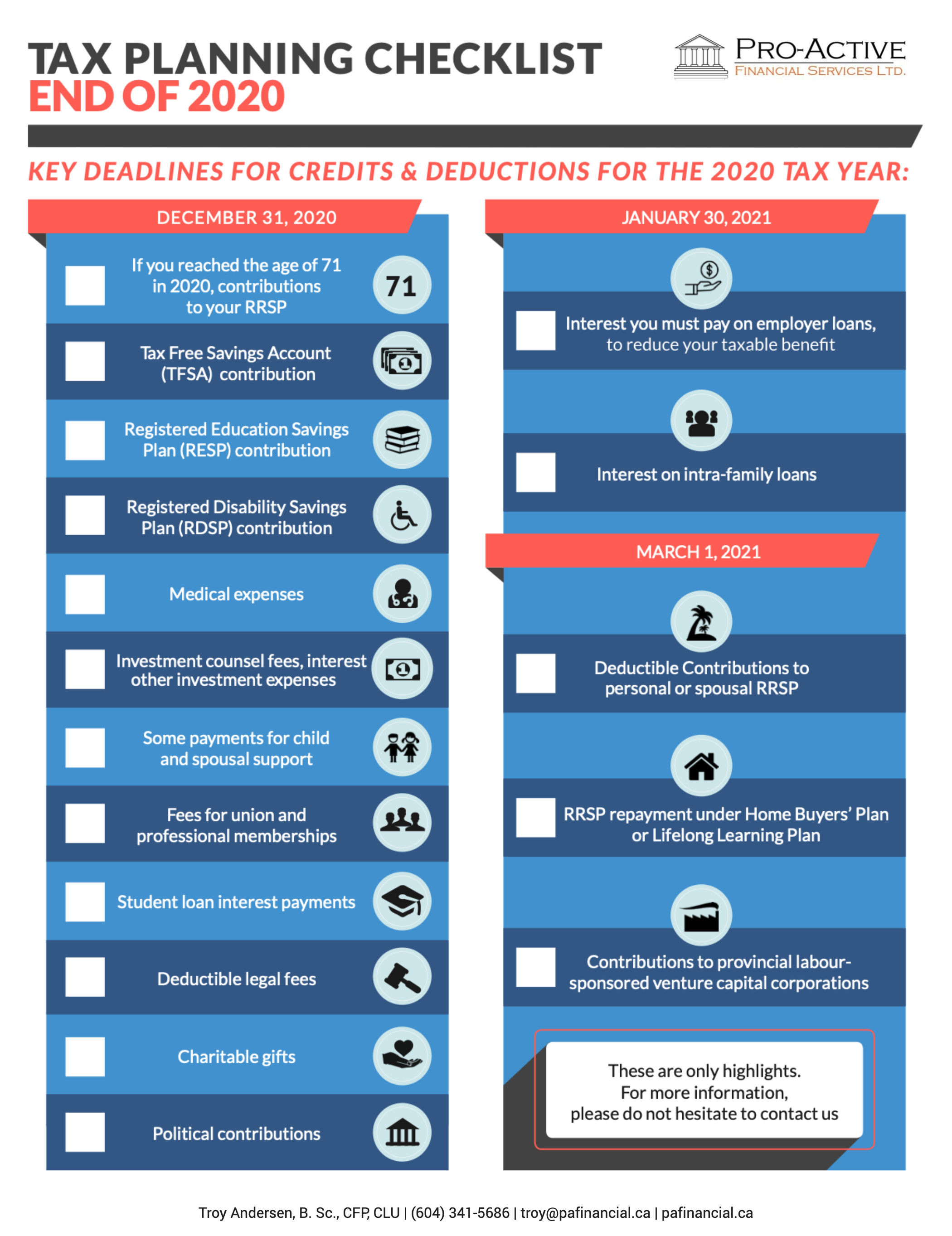 Now that we are reaching the end of the tax year, it’s an excellent time to review your finances. We’ve listed below some of the critical areas to consider and provide you with useful guidelines.

We have divided our tax planning tips into five sections:

To help Canadians deal with financial hardships due to job loss because of COVID-19, the Canadian government introduced several benefit programs. If you received any of these benefits, you should be aware of the tax ramifications.

The Canada Emergency Response Benefit (CERB) was the first benefit program issued by the government and ran until September 26, 2020. If you received the CERB at all during 2020, the government will issue you at T4A, showing how much money you received from the CERB program. You must then declare that as income when filing your 2020 income tax return. Since no tax was taken off at the source, be sure to put aside money to pay for potential income taxes on your CERB income.

As of September 27, 2020, the government offered three replacement benefit programs:

For all three of these programs, the government will be withholding 10% in taxes upfront, but you may end up owing extra tax, depending on the rest of your income for 2020, so it’s important to set extra money aside for taxes.

Also, there is a unique condition for the CRB only. If you make over $38,000 in 2020 (excluding the CRB), you will have to pay back the CRB at a rate of 50 cents for each dollar of CRB you earned above the threshold.

If you paid interest on an eligible student loan in 2020, you can claim a non-refundable tax credit in the amount of interest you paid by December 31. In addition, you should be aware that student loan payments were frozen for six months – from March 30 to September 30. No interest accrued on student loans during that period.

If you have any questions about your taxes for 2020, contact us – we can help you! 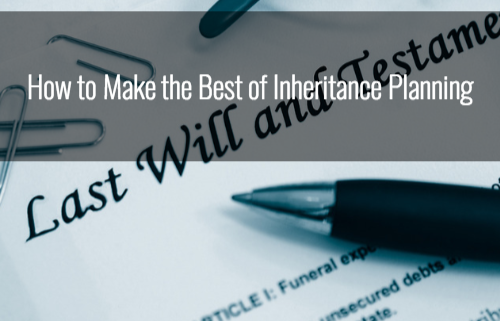 How to Make the Best of Inheritance Planning

Inheriting an unexpected, or even an anticipated, lump sum can fill you with mixed emotions – if your emotional attachment to the individual who has passed away was strong then you are likely to be grieving and the thought of how to handle your new-found wealth can be overwhelming and confusing but also exciting. One of the best pieces of advice in this situation is to give yourself some time before making any binding financial decisions. The temptation to quickly put the money to so-called ‘good use’ or to rush out and spend it can be strong but you must allow the news to sink in and also take some time to consider your options before you embark on the process of dealing with the inheritance. In the short term, put the money away in a high interest savings account and take time to research and think carefully about your financial goals and objectives and how this inheritance can help you to secure and maximise your financial future in the best way.

Although there is no one-size-fits-all approach to dealing with larger sums of money, here are some useful ideas of where to start.

If you have significant or high-interest debts, one of the safest options of all is paying this debt down. Not only will you achieve a guaranteed after-tax rate of return of your current interest rate, it can also add to your feeling of financial security and potentially offer you a more consistent financial picture. Debt often carries with it a significant interest rate – particularly on credit cards and overdrafts for example – so in many cases, eliminating this burden should be considered as one of your main priorities.

However, you may like to take careful note of the option below regarding investing the money instead as much depends on the prevailing interest rates and, of course, your appetite for risk, as you may well find an investment option with a potentially higher return more attractive.

A particularly effective way of investing an inheritance is to add it to your retirement savings – especially if your nest egg is not looking quite as healthy as it should due to missed savings years for example. Those with lower or less reliable incomes should look upon this option as a great choice in particular.

After considering your own future financial needs, giving some of your wealth away to either charities or to family and friends is a good option to share out some of your inheritance to those who could benefit from it. What’s more, donating to charity can also offer you some tax breaks which may reduce your overall tax burden.

Many individuals see this philanthropic route as offering them the opportunity to do something meaningful and rewarding with their wealth and contributing towards their own sense of moral duty and emotional wellbeing.

Of course, you are likely to be keen to spend some of your wealth on yourself and your family, particularly if your financial situation means that you have previously had to be more careful and prudent with money than you would have liked. A great way to do this is to create a spending plan so that you can enjoy the benefits of spending, without it significantly eating into money set aside for your financial planning goals. You could, perhaps, aim to set aside 10% of the inheritance just for yourself and loved ones to enjoy. The proportion will naturally depend on your circumstances but, in principle, it’s a great idea as it allows you to balance sensible saving and investments with some short-term enjoyment of your wealth.

Talk to us, we can help. 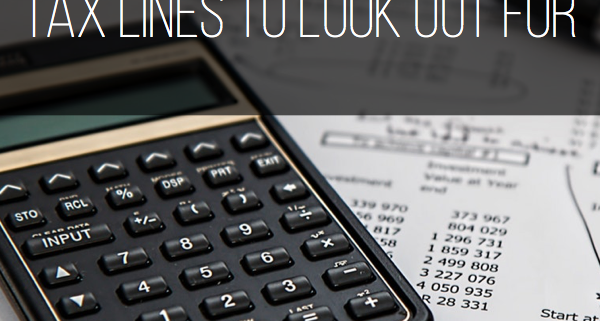 It’s that time of year again, when many of us sit down to complete our income tax return and hope that we have done enough preparation to ensure a smooth and speedy process. Unfortunately, there are a number of complexities that can cause us problems – here are a few of the most common issues experienced by individuals when submitting their tax returns:

Expenses relating to medical expenses such as prescriptions, dentures and many more can be claimed for a non-refundable tax credit. You should also be aware that you can claim for yourself, your spouse or common law partner and any dependent children under the age of 18. You can also claim for certain other individuals whom you can clearly evidence are dependent on you (and the list of such individuals has recently been widened and can include grandparents, uncles, aunts, nieces and nephews).

You can claim tax credits for qualifying charitable donations that you made in 2017, though they are subject to an annual limit at 75% of your net income. You may also be eligible for a provisional donation tax credit. To receive such credits, you must supply a charitable donation receipt as evidence of your donation.

What’s more, there is a new formula for calculating the federal tax credit, depending on the value of donations. This is as follows:

Although this credit ended in the 2017 federal budget, it can still be claimed for the time period of January 1 – June 30, 2017. There are a range of eligible passes, including passes allowing unlimited travel within Canada, short term passes allowing unlimited travel for five days of which at least 20 days’ worth are purchased during a 28 day period and electronic payment cards.

Take note of the notice of assessment from your previous year’s tax return as it will contain important information that will apply to the submission of your current year’s return, such as your RRSP contribution limit and any carry-forward amounts.

Remember that you may be required to submit receipts alongside your electronic return at a later date, as requested by the CRA.

Child care expenses include payments made to caregivers, nursery schools, day care centres and camps and other similar institutions. The deduction is usually best claimed by the lower earning spouse.

The deduction is the lesser of the following three:

·      the total qualifying child care expenses which have been incurred

·      two thirds of the income earned by the individual making the claim.

If you owe money when your income tax return is complete, the only way to delay payment is to delay the filing until the April 30th deadline. Alternatively, if CRA owes you money, then file as early as possible. 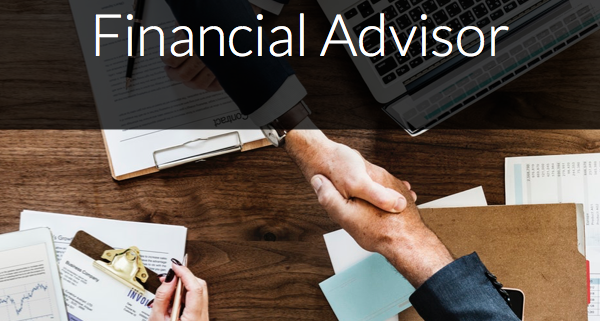 Working with a professional to help you to make sense of your finances can be a wise move, but for this relationship to work effectively it is important that you understand what to expect from your financial advisor.

What can your financial advisor help you with?

What should your financial advisor inform you of?

What will your financial advisor need from you or need to ask you about?

If you’re looking to achieve your financial goals, talk to us. We can help.